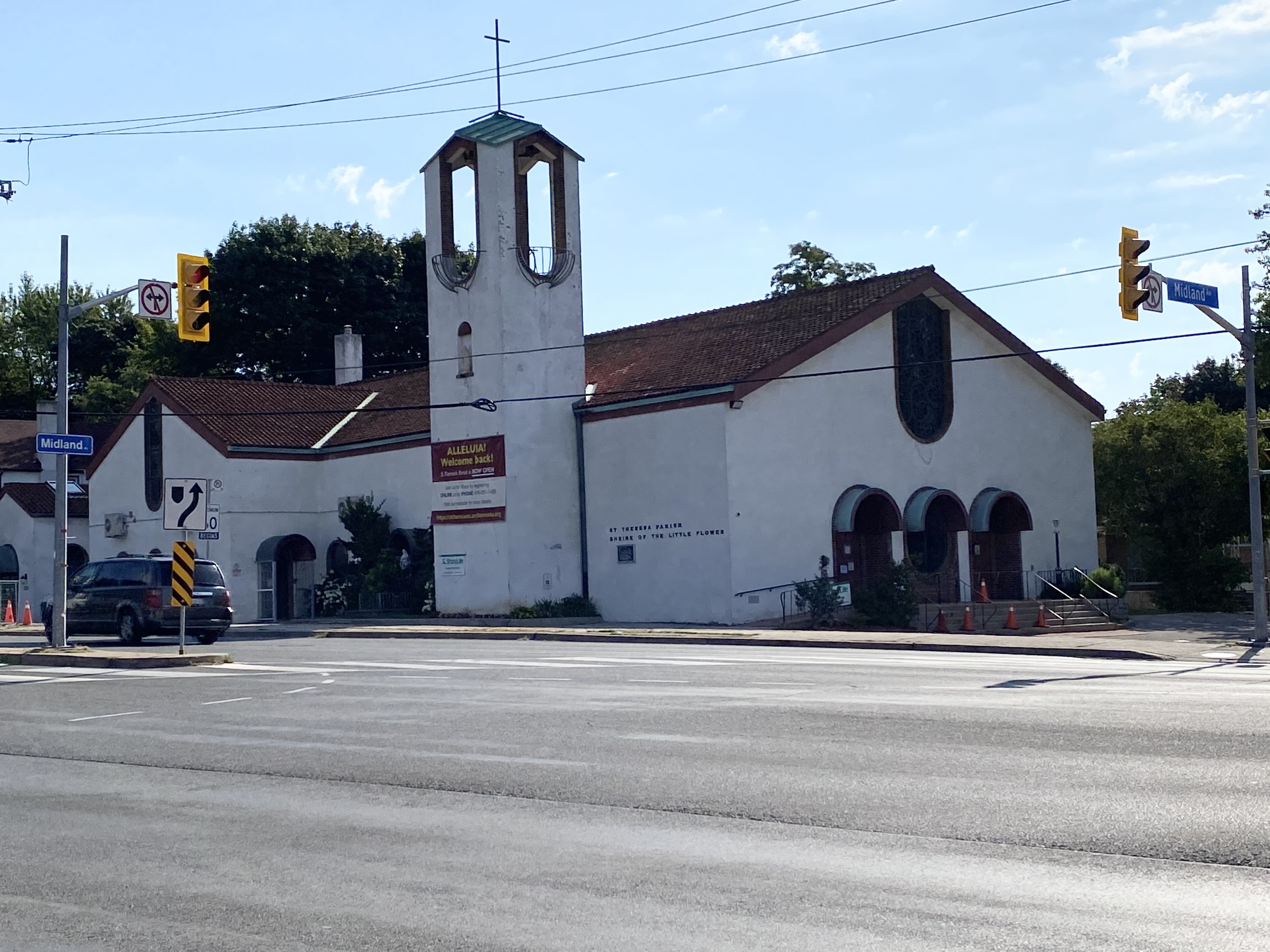 The Beginnings
The original church which seated about 200 people was built with a Spanish motif and opened on December 10th, 1933 to serve about 25 families residing in the area. But prior to this, from October 1, 1926 to December 10, 1933, these families attended Mass at the chapel of St. Augustine's Seminary.

In 1934, Fr. Ambrose O'Brien was appointed Pastor of the Shrine and moved into a house at 28 Kelsonia Ave, since there was yet no Rectory. On December 10, 1933 at 9:30 am, Archbishop Neil McNeil came to bless the Church and to celebrate Mass afterwards.

Eye witnesses report that as the procession moved from Kelsonia Avenue to the Church that morning, they saw a single rose blooming in the snow beside the building. The Church was dedicated as a Shrine in honour of St Therese of Lisieux, a very popular saint who had been canonized eight years earlier.

Following World War II, and after having served in the Army, Fr. George Cherrier was named Pastor in November 1945, who remained for 34 years until 1978.

During his tenure, many projects were accomplished. The Parish Rectory was built in 1949, and the current Ave Maria Room was used as the Parish Hall.

The New Church Building
The ongoing growth of the Parish community in the area necessitated building a larger Church.

In May 1965, the original Church was demolished, and Masses and liturgical functions were moved back to St. Augustine's Seminary. It was built in the same Spanish-style as the original, seating 640, and was blessed by Archbishop Philip Pocock on June 12, 1966.

Fr. Ambrose Sheehy was Pastor from July 1986 to October 1995. In the last 80's, Fr. Sheehy undertook a large renovation project, redesigning the access to the Parish Office, the Ave Maria Room, the St. Joseph Room, the sacristy and the parish hall.

St. Theresa's Reliquary
In 1995, Fr. Hugh McDougall of the Scarborough Foreign Missions was appointed as Administrator of the Parish, followed by Fr. William Swift who was appointed pastor in July 1998 and remained until June 2006. During this time, our Parish was honoured to be chosen to receive a visit from the Canadian Tour of the St. Therese Reliquary in October 2001.

Fr. Florentine Rajaratnam was named Administrator of St Theresa's in July 2006 and subsequently appointed Pastor in the Fall of 2007. He has seen the fulfillment of our 75th Jubilee Year, as well as the realization of the Stained-Glass Window Project depicting the "illuminati" Mysteries of the Rosary.

Our parish organized an all-day veneration of St. Theresa's relics during her feast day on October 1, 2015, to commemorate the 90th year of her canonization, which culminated with a Solemn Mass, attended by a large number of devotees and pilgrims from around the archdiocese.

Bishop Vincent Nguyen officiated the opening and blessing of the Holy Door. Thousands of pilgrims from the Archdiocese visited our church during the Jubilee Year of Mercy.

A Church in Pandemic
On October 1st, 2017, Fr. James Chitteth, CFIC was named Administrator and eventually Pastor in June 2018. He is known for bringing in much-needed changes to the parish, such as closed circuit security systems, screen projectors for Mass, and cameras to offer livestreamed Masses from the parish.

Two years later, the world was plunged into a deadly coronavirus pandemic that took the lives of at least 22,500 Canadians (as of March 2021). Fr. James found himself ministering to a church in pandemic - making the sacraments available to the sick, burying the dead (some of which died from the coronavirus disease itself), while making sure the church was ready for a safe reopening after province-wide lockdowns. That day arrived in June 2020, and the parish was able to safely celebrate St. Theresa's Feast Day that October even in the midst of a global pandemic.

All these were successfully accomplished by the time Fr. James was called to minister at another parish in late 2020.

Present Days
Despite the difficulties posed by the coronavirus pandemic, our parish continues to grow as a vibrant community through our strong spiritual traditions and devotional practices under St. Theresa's patronage.

Through the years, we preserve our devotions to St. Theresa, keeping her feast day of October 1st special, and through a dedicated weekly Mass followed by Novena Prayers and blessings with a relic on Tuesdays at 7:00 in the evening.

As the parish comes out of the coronavirus pandemic, devotions to both St. Therese and the Sacred Heart take on a more urgent appeal. We pray that Therese continues to shower down roses from heaven, and that she may pray for her spiritual sons and daughters who are seeking God's protection in the midst of suffering.

And so we pray, as we do every Tuesday here in our parish: St. Theresa, little flower of heaven, we bring our devotion to you!